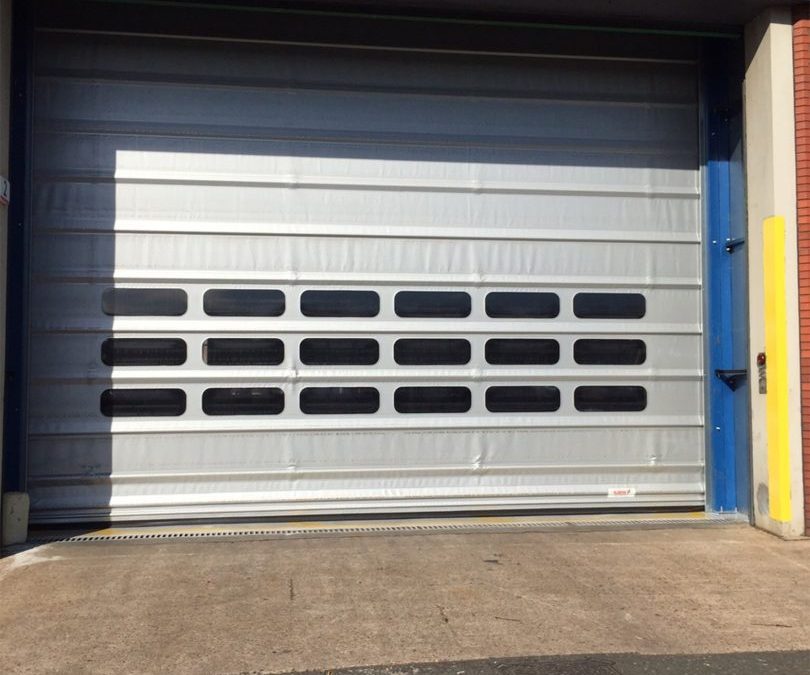 Two giant high speed roller doors have been installed at a bus chassis works in Lancashire to help retain heat and reduce energy bills. The doors were fitted behind existing roller shutters that remain in place to provide overnight security.

The new doors are each 7m wide and 4.6m high, yet are able to open and close in a matter of seconds. Typically, the doors will be operated many times during a working day, hence the need for speed. They were designed, built and installed by loading bay specialists sara LBS, one of only a few firms with the capability to undertake such a demanding job.

Kevan Anderson, the sara Regional Sales Manager responsible for the project explains that heat retention is an increasingly important issue for many factories and warehouses: “Energy prices have been going up markedly for some years and the trend is expected to continue well into the future. Furthermore, employers are becoming more and more concerned about providing a comfortable working environment because it aids productivity, reduces absenteeism and is an important health and safety issue.”

At the start of the project several design options were considered, including building brick piers to break each door up into two. However, it was soon decided that keeping the original openings was the best plan, as this would provide clear access for the occasional extraordinary load, such as when there was a need to bring in heavy machinery or tooling.  This decision went a long way to defining the brief for the new high speed doors.

In fact, all of sara’s doors are bespoke, designed to meet the needs of the application, but based on standard components and subsystems. Its high speed range of Sprint fast action doors combine quick opening speeds with operational safety for both internal and external applications.  These are complemented by a full range of other door types including roller shutter doors, sectional overhead doors, fire doors and hinged steel doors, plus lifts, ramps, dock levellers, dock shelters and other equipment that allows sara LBS to offer a full loading bay service.

The high speed doors are made of a high tech fabric that is strong, lightweight and long lasting, sections of which had to be joined together to make the 7m width required for this project. For this sara used a tried and tested method that involves both gluing and stitching to create a perfect seam.

The drive that opens the doors also had to come under the careful scrutiny of the design team. The doors were going to be far heavier than usual and synchronisation across the whole width of the curtain had to be ensured. One option was to use a single large, powerful motor capable of accelerating and decelerating the door through both opening and closing operating cycles.  However, this implied an asymmetric design with the drive at one end, which could have lead to a synchronisation lag at the other end.

Therefore, it was decided to develop a twin-drive design with motors at both ends. For this to work, precise synchronisation of the motors’ operation had to be ensured. A mechanical solution could have been used, but a more elegant solution was developed by controlling the instantaneous speed of both motors with the same electronic inverter, into which an electronic synchronisation lock had been programmed.

“The inverter basically ensures soft starting and soft stopping of the door curtain at the beginning and end of its travel,” says Kevan. “It does this by controlling the acceleration and deceleration millisecond by millisecond, which means the lock cannot go out of synchronisation.”

In fact sara also decided to use relatively large motors on the drives so that they were able to cope with the deadweight of the door, its momentum while in motion and any wind load, which could be significant on such a large area.

“We installed the doors in January, so their ability to retain heat was immediately apparent,” says Kevan. “By February people probably wondered how they ever managed without them.”

The new sara LBS Sprint fast action doors are each 7m wide and 4.6m high, yet are able to open and close in a matter of seconds.

The doors were designed, built and installed by loading bay specialists sara LBS, one of only a few firms with the capability to undertake such a demanding job.

sara LBS decided to use relatively large motors on the drives so that they were able to cope with the deadweight of the door, its momentum while in motion and any wind load, which could be significant on such a large area.